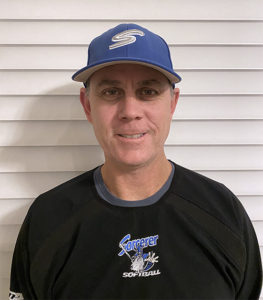 2021 will be Coach Max Allman’s fifth year as a Sorcerer coach and tenth year of coaching competitive softball. This will be Max’s third year as an assistant for Mike and Jenny Williams at Sorcerer.  Previously, he was an assistant under Bill Schroll at 14U for two years; that Sorcerer team was runner-up at PGF Nationals (Premier) and had a 5th place finish at the Independence Day Tournament in 2018.

Prior, he was a head coach at Castro Valley Synergy 10U, 12U and 14U for five years. During that time, his teams earned berths and competed at two PGF Nationals and qualified for ASA A Nationals twice (going once).

He has a tremendous passion for teaching young athletes both the fundamentals and the mental aspects of the game.

As a sports junkie, Coach Max has participated in numerous sports (including baseball and softball) at a competitive and recreational level. At the collegiate level, he played tennis for Cal Poly SLO and was a three-time NCAA Division II All-American (1989-92), was a member of a NCAA Division II National Championship Team (1990), and was the captain of the team his senior year. Max is employed as an economist with a consulting firm in the SF Bay Area. He has two daughters, Krystyna, who is a biomedical engineering student and playing softball at Cal Poly San Luis Obispo (after four years with Sorcerer) and Caroline who is playing Sorcerer currently.